F is for Fairy Gardens

April 25, 2014
Fairies are flocking to the gardens of families all over the Twin Cities this spring.  Don't be surprised if you see one pop up in your neighborhood or even in your very own back yard.   If you wish to attract your own fairy, pixie, or gnome be sure to create a welcoming environment.  They really don't need much and are quite creative in their own right. 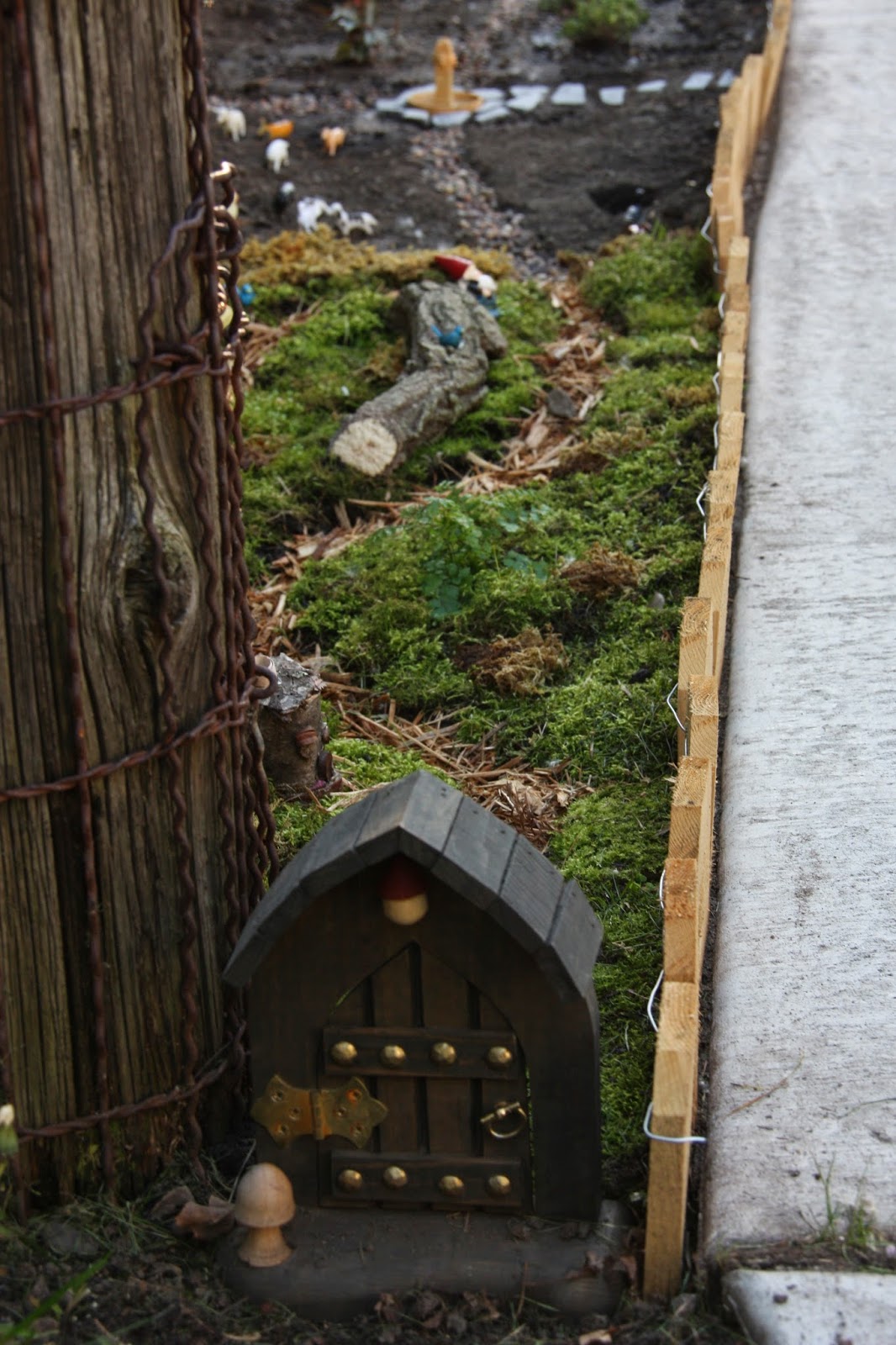 It was about six years ago when we made our first fairy garden.  It was very simple.  Using the base of a terra cotta pot, we filled it with sand and spent a whopping $5.00 at Michael's picking out the tiniest items such as a mini watering can, flowers, and wooden painted birds, bees, and ladybugs.  The fairy surprised us that night by sprinkling fairy dust (it looked a bit like red glitter) all over the garden.  We always knew the fairy had come because some of the items would be moved when we looked at it in the morning.  The fairy didn't come every night so it was always fun to look and wait for changes  I'm sure he or she was busy taking care of other gardens. Towards the end of summer we were delighted when the fairy left behind tiny little gardening tools that looked a lot like some buttons I once saw for sale at Joann Fabric.  Sometimes my older daughter would write a letter or two to the fairy and occasionally, she would receive a letter back that didn't look at all like my writing. 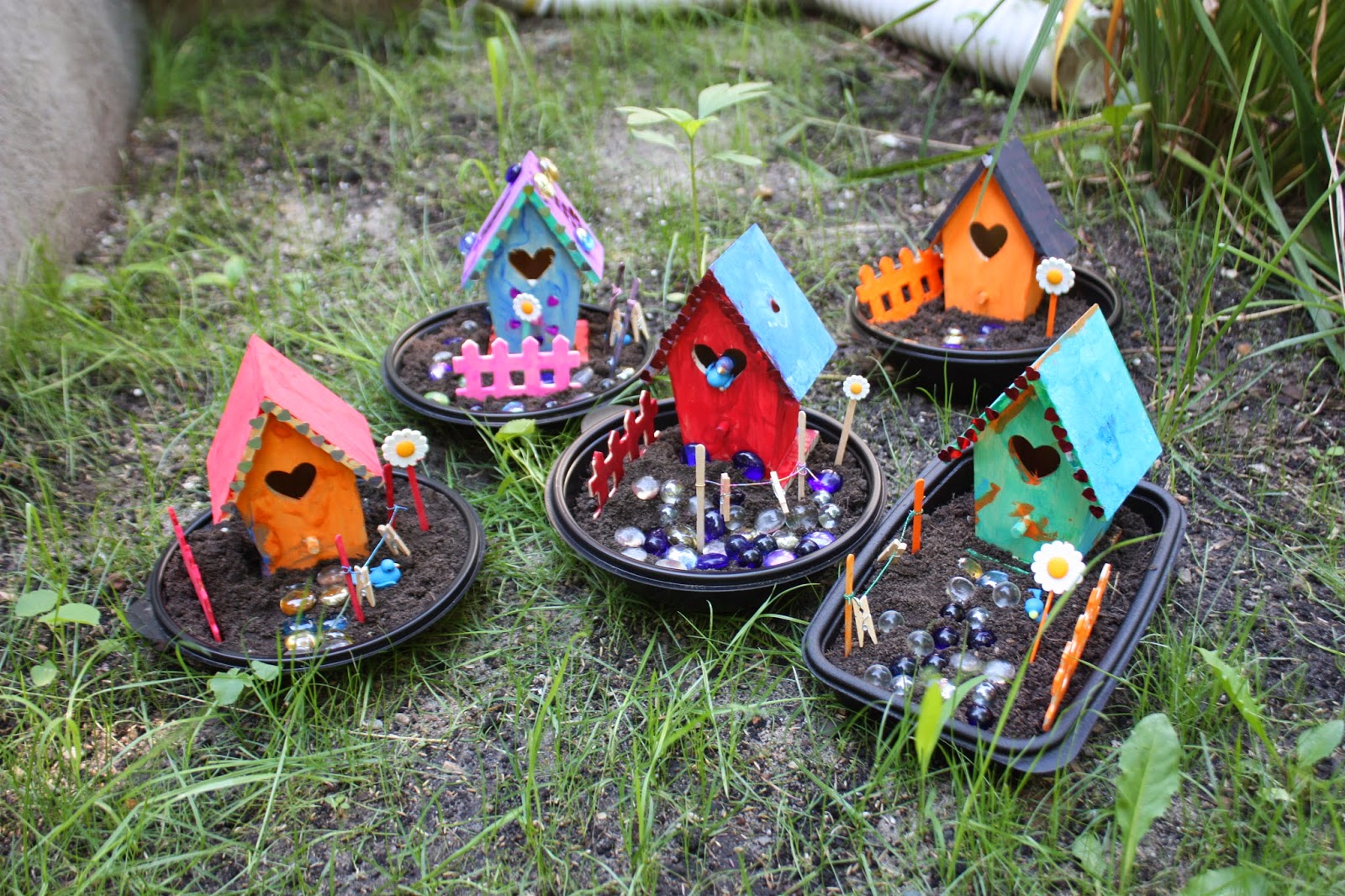 In 2011 we kicked our fairy gardening into high gear after we held two craft camps that focused specifically on building fairy houses and pixie nooks.  We painted plastic yogurt containers with a shiny gold paint after cutting out a little rectangle for a door.  The kids decorated their own cottage house with dried moss, paint, colorful stones, and even stickers in the shape of little white fences and flowers.  So many children signed up for this craft camp we held a second one a few weeks later specifically designed to create pixie nooks. We collected the plastic black bottoms of to go containers from a few of our favorite restaurants and filled them with black dirt.  The children each painted a little wooden bird house and decorated it with stickers, ribbon, and ric rac.  Then the kids used buttons in the shape of daisies and stuck them onto little wooden sticks to make flowers.  We also made a little clothesline using a piece of string attached to two sticks and hanged tiny little clothespins to the line.  A fence and pretty little marbles to create a walking path finished off these sweet little nooks.

In 2012 we went plain overboard by dedicating our entire summer to mythical and magical creatures.  We created a woodland section that leads to a farm with tiny little farm animals purchased at a local garage sale, a town center, an apple orchard, a city park, and even a beach with a light house.

Uncommon Gardens has to be my favorite gardening store of all time.  We stopped by yesterday to pick up a packet of seeds specifically designed to attract fairies and a tire swing. Picture coming as soon as we get it set up.  I immediately signed the girls up for the Garden Elves Club and can't wait for them to take some classes this spring and summer. I also bought the Straw Baling book by Joel Karsten and fish emulsion to get the straw bale garden going.

In past summer, I have cut moss out of a section in our front yard to create the woodland and I mixed it with dried moss I purchased at one of our other wonderful local nurseries called Kleir's in South Minneapolis.  We used smaller pieces of mulch for the trail in the woodland section. If you look closely you will see a two little houses I purchased for 50 cents at an estate sale last spring. 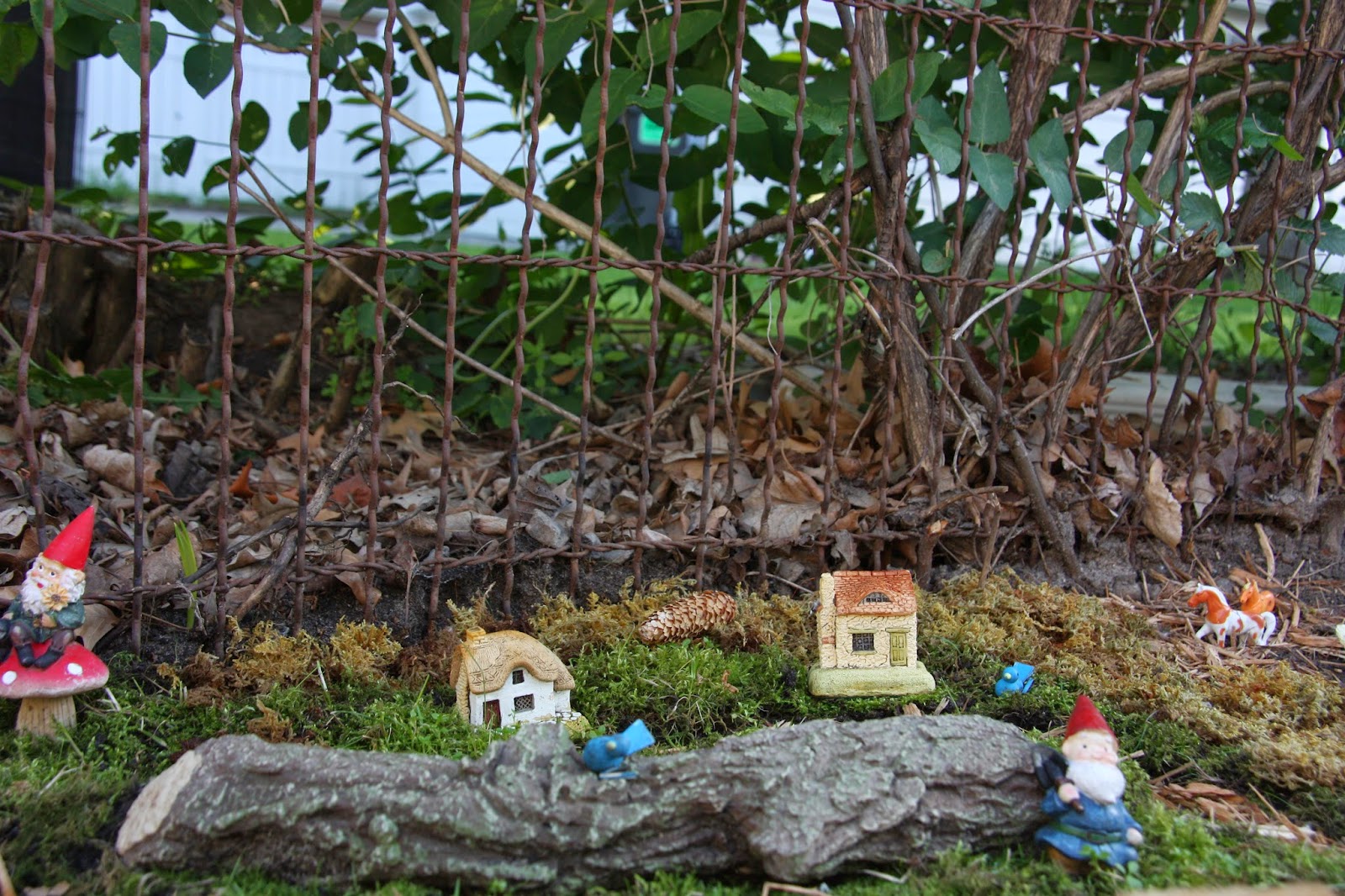 You'll see a dried tree log that I found in the basement when we first moved into our house.  A few years later I realized it was part of the gas fireplace. I have no idea why it was in the basement and not the fireplace, but because the fireplace has a few issues and we don't use it, the log fits perfectly in the fairy garden. Peat rock purchased at Kleir's is used to create the walkways through downtown Fairyville and through the city park.  The farm and downtown are still in the works. I'm hoping to find or build a tiny little barn, school house, and church to finish it off.

Last summer I purchased a handmade wooden door that acts as the gateway to this magical land at The Linden Tree.  We also purchased a tiny little home built entirely of bark. Little Enchantments is a darling store filled with miniatures of everything you can think for both doll houses and fairy gardens.  If they don't have what you're looking for, then they'll teach you how to make it!

Last summer they offered several classes on creating your own fairy garden. I have purchased many items there including the town center's watering hole with statue, a little half-circle pond, walking bridge, fences, bench, bird bath, and I even made the flower displays in the two little pots on either side of the arbor. My older daughter spent some of her allowance on a decoration/water fountain piece that reminds me of something from a Gothic style New Orleans garden that hangs on one of the fences.

Wagner's is now one of my staple gardening stores since the Lyndale Garden Center closed in 2006.  I tend to purchase most of my herbs and potting flowers there.  On my most recent visit, I found this tiny little lemon-scented thyme that works perfectly for creating the "orchard" section of the fairy garden.

Don't forget to check out Little Enchantments in Edina and Heartfelt in Linden Hills for fairy garden classes.