I almost built a patio by myself.... 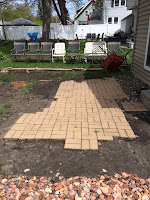 Once upon a time, I wanted a patio...I mean, not just the slapped down bricks with broken down wooden steps, a real patio. So, I went out and got estimates, went into shock at the cost, and then slowly, VERY slowly, started to make my own patio.  First I removed all of the old bricks I had placed directly onto the dirt about two years ago. I figured out how big I wanted to patio to be and started digging.

WAIT!  I called Gopher State One Call first to make sure I knew exactly where the gas and electric lines were buried....and then I started digging and then I dug and dug for several weeks and I thought I had almost dug a hole to China, when I stopped to measure, I had only dug about two inches down. I used my little red wheelbarrow to move the bricks and stack them around the perimeter I deemed to be my dream-sized patio.

Then, I got it in my head I wanted to build a pergola. This is about when my husband's chronic heartburn symptoms started.  I rented an auger from some guy on Craigslist. A nice guy who didn't seem like he wanted to kill me for using his auger. I brought a friend just in case and we met at a public parking lot during his lunch break. Luckily, this friend had a big ass Suburban and we were able to go to Menards and stick four, 4x4x12 green-treated posts in her her big ass Suburban.  I treated the bottom 4.5 feet of the posts with some really stinky stuff to seal it or whatever the Youtube video said to do and the guy in the paint department told me to buy. I have no idea what video I watched...but it was fairly helpful. 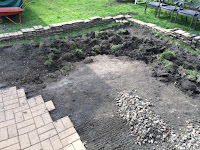 Then, I somehow talked my next door neighbor lady with back issues into helping me use the auger to dig out four feet for the posts. I kept pleading with her to let me do the hard work, but it turns out, she's a hell of a lot stronger than me. We stopped at around three feet because that's about all we could do.  We attempted to dig holes 10 feet apart from each one so they would be in a perfect square. 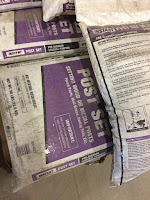 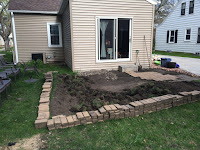 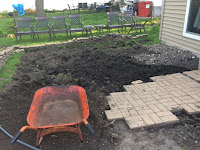 I begged another friend who has excellent attention to detail abilities to help me stick the posts into the holes and fill them with cement (see Post Set pictures on right). One of the holes was way off the mark....I had had to buy a manual auger and dig out a new hole (because I had given the rented auger back by now). Turns out the manual auger was a lot easier to use and not half as stinky as the gas one.  By this time, I was gaining a bit of upper arm strength.

I lured my 13-year-old daughter into helping me stick the last post into the ground. She held it for about 20 seconds, then walked away. Thank goodness it was quick drying or I would've been pounded into the ground by that post. 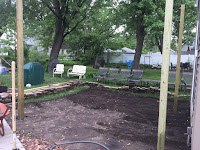 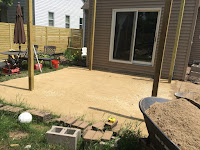 This is when my husband put his foot down and said he'd had enough of my DIYing and demanded professionals be called in to finish the job.  He-of-Little-Faith decided (rightfully so), that I would never be able to tamp the sand and set the bricks just right. I had to agree. So we blew our budget and hired the beloved Grant from Modern Landscapes to save the day.  He and his crew (a teacher from Wisconsin a summer break) put me and my girly muscles to shame and finished the job quickly. They had to dig about five more inches down, hauled in sand, and more sand, and more sand, tamped it down, picked up the bricks....laid them down perfectly, carefully tamped the bricks down and it was gorgeous. Check out my Half-Ass DIY pergola, horizontal fence, and hanging planter stories here. 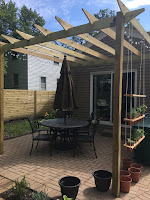 April 27, 2012
If you’re so lucky to have your Alphabet Summer during the Olympics, be sure to try to plan something ahead of time around the different summer sports that will be highlighted.  Check out the official website of the Olympics for more information: olympic.org What kind of equipment is needed for this sport? Where and when did this sport originate? Have you ever played this sport? What is your favorite sport? Do you know anyone who plays this sport? Are there any famous people who play this sport as a professional? Are there any books or movies that highlight this sport? A – aerobics, archery, aquatics, automobile racing B – Badminton, biking, boxing, basketball, baseball, bocce ball, bowling, body building, bull fighting, boomerang, bobsleigh, biathlon, billiards C – croquet, cricket, cross country skiing, curling, cycling, canoeing D – darts, deep sea diving, downhill skiing, dancing, diving, dog training, dog sledding, decathlon E - equestrian F – football, fishi
21 comments
Read more